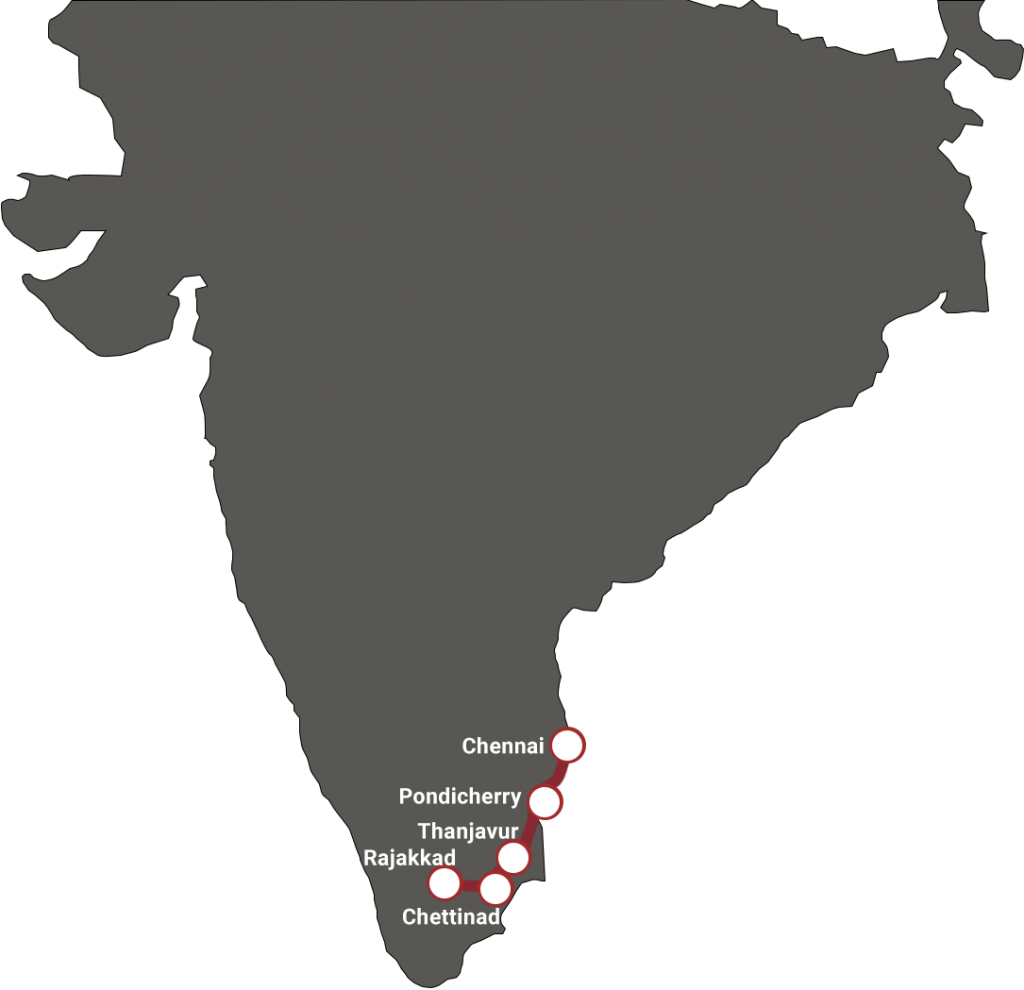 Tamil Nadu bears witness to a rich history of empires and dynasties who left their marks in stone temples—the state’s major attractions. One can trace the history and evolution of architecture, dance and music by studying temple motifs; while age-old traditions and rituals continue to this day—every visit is a cultural experience. From sandy beaches to forested mountains, temple towns to tea plantations, Tamil Nadu can offer a plethora of inspiration for all travellers.

The Path to Tamil Nadu begins in the port city of Chennai, whose streets evoke a sense of history that is intermingled with its political identity today. Apart from the iconic sights, Chennai boasts one of the most succesful artists village in all of Asia. We then head south along the Coromandel Coast to the former French outpost of Pondicherry to uncover its French history and discover the tales and tragedies of the city’s historic characters.

Further south inland along the Kollidam River is Thanjavur, a deltaic city of temples & traditions. Thanjavur has been the centre of art and culture for years—with distinct painting, music and dance traditions. The Tanjore paintings with murals of Lord Krishna are sought-after artefacts while Carnatic music has been codified since the 16th Century; and the dance form, Bharatnatyam, traces significant styles and modifications to the city. As we trace the roots of Bharatnatyam on temple walls, we embark upon a journey to discover Thanjavur‘s unique identity.

Much further south of Tamil Nadu are the towns of Karaikudi and Devakottai, also known as Chettinad, a ghost town of glorious mansions, including the ornate ancestral mansions of the “The Chettiars”. Our journey concludes with a drive into hill country outside the city of Madurai to Rajakkad Estate, where a world of lush forests and coffee estates await.

The Path to Tamil Nadu can quite easily be extended into the Western Ghats or combined with the Path to Kerala. 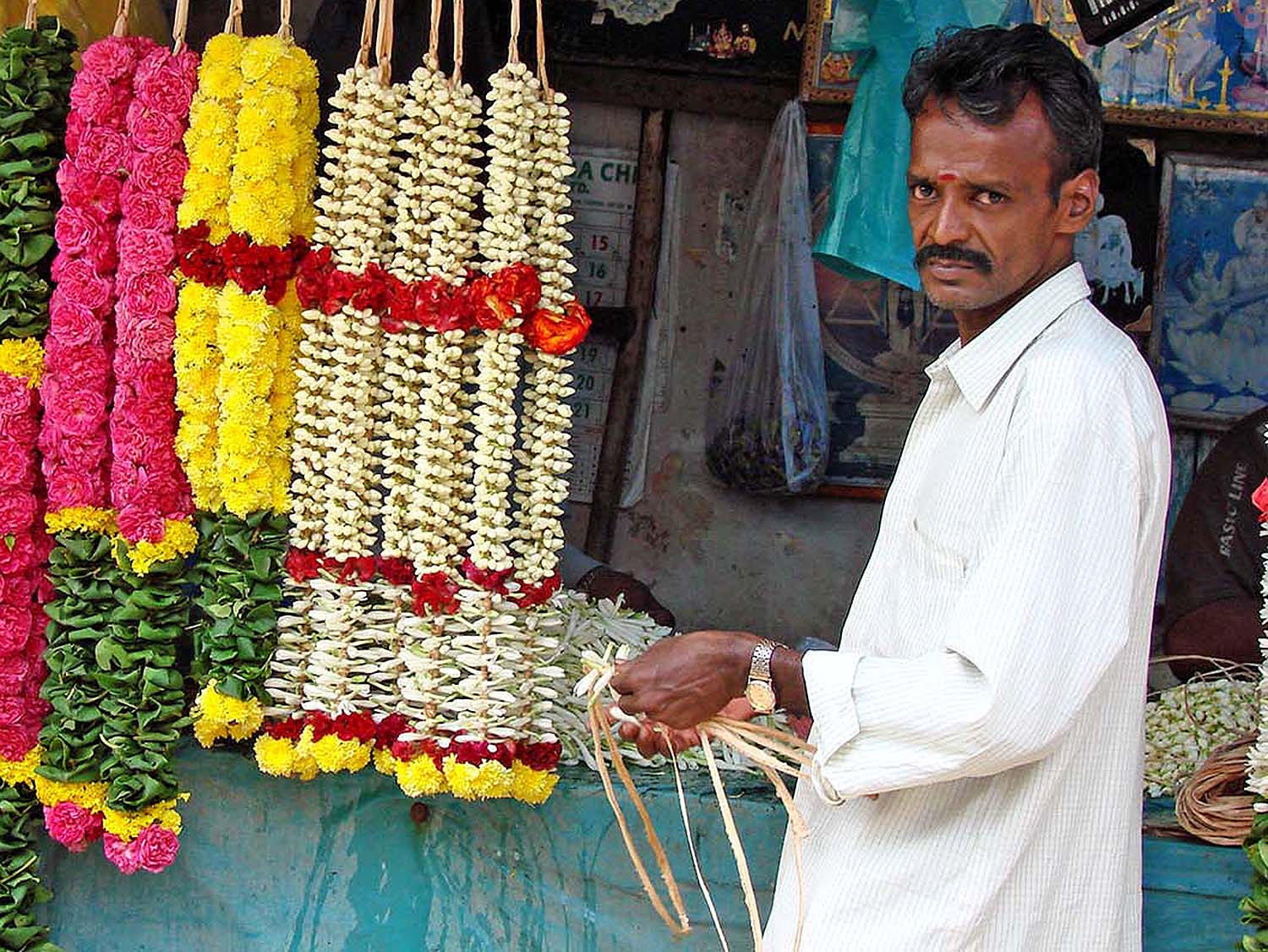 Chennai
Read More
In Chennai: visit one of the best artists village in all of Asia. 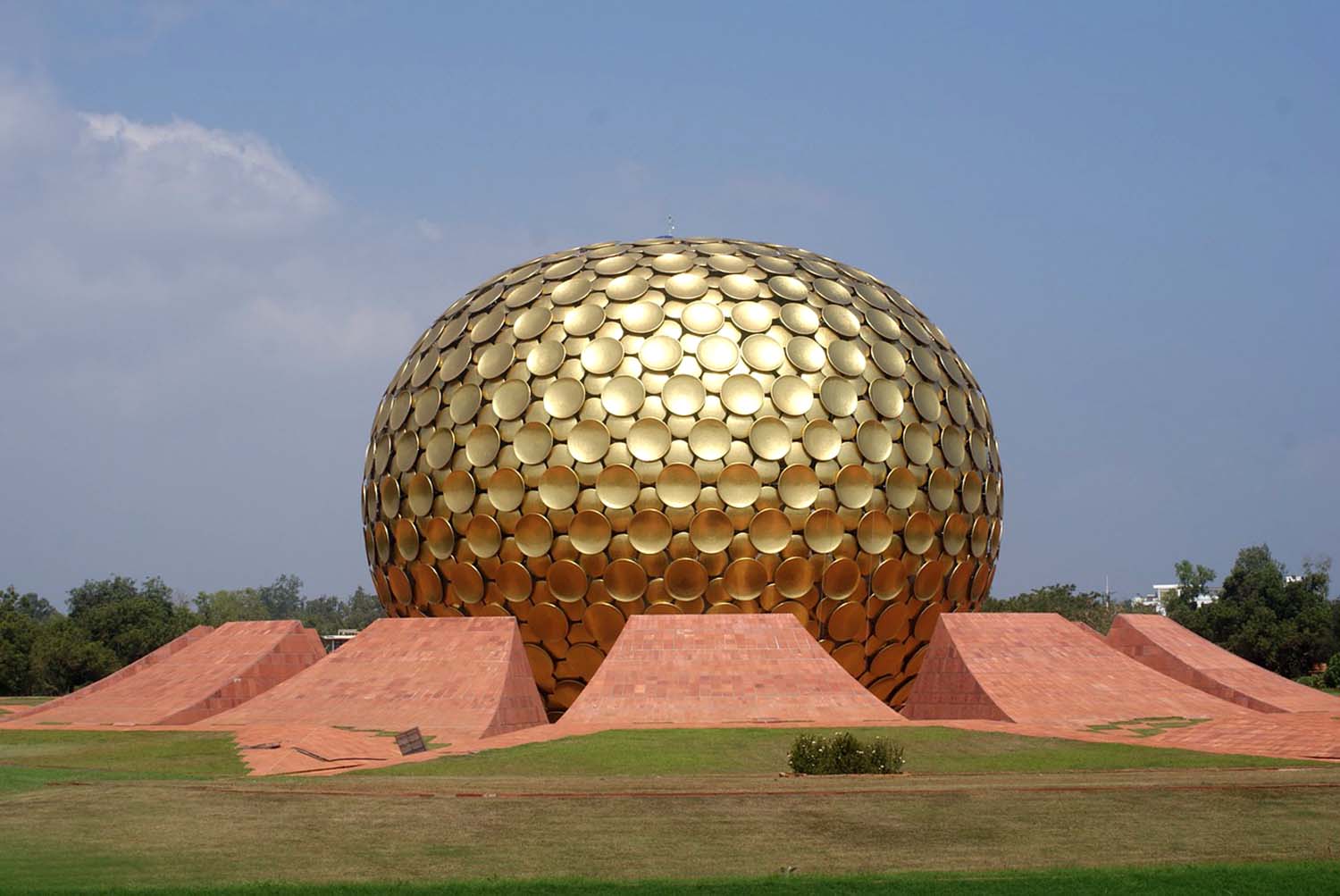 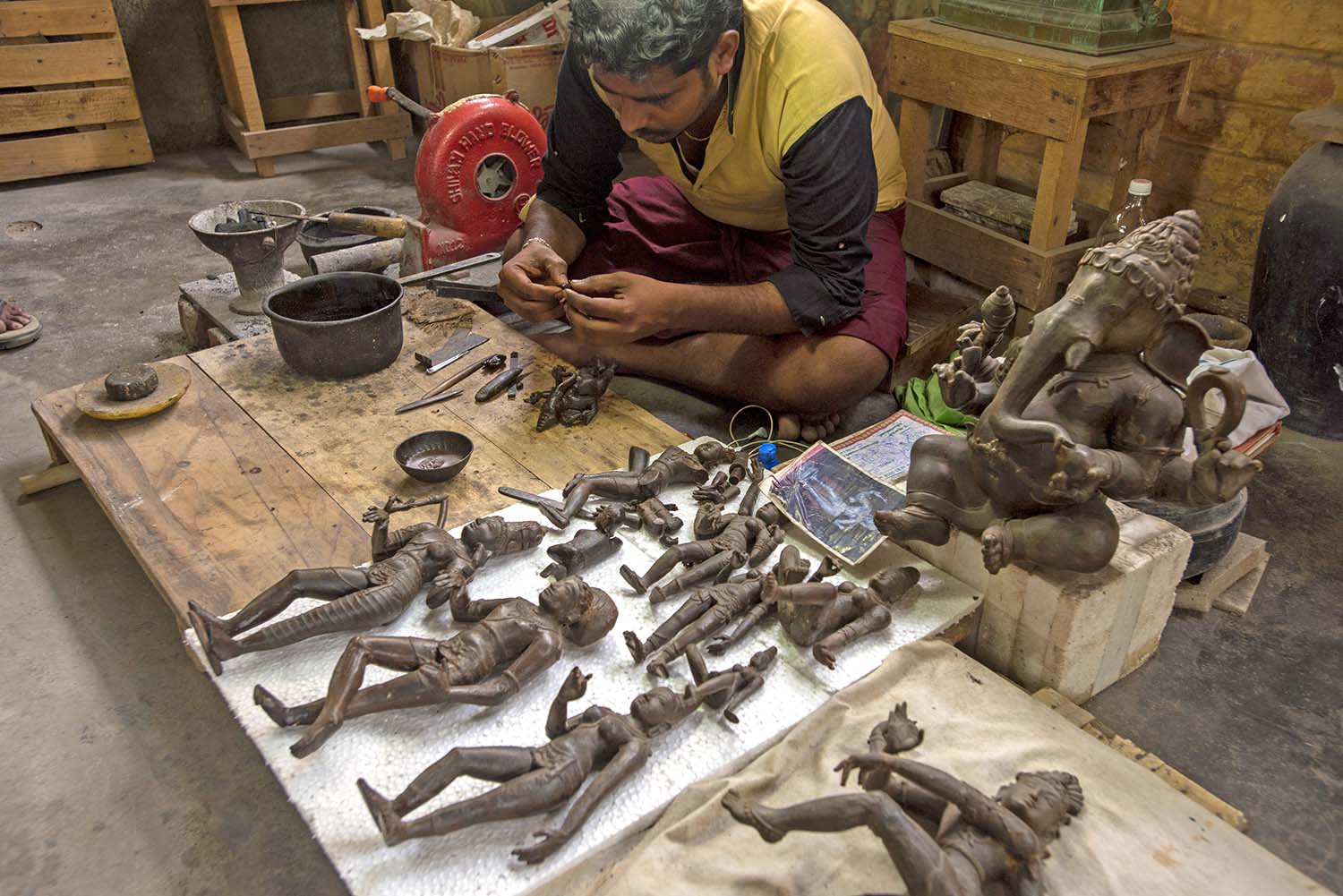 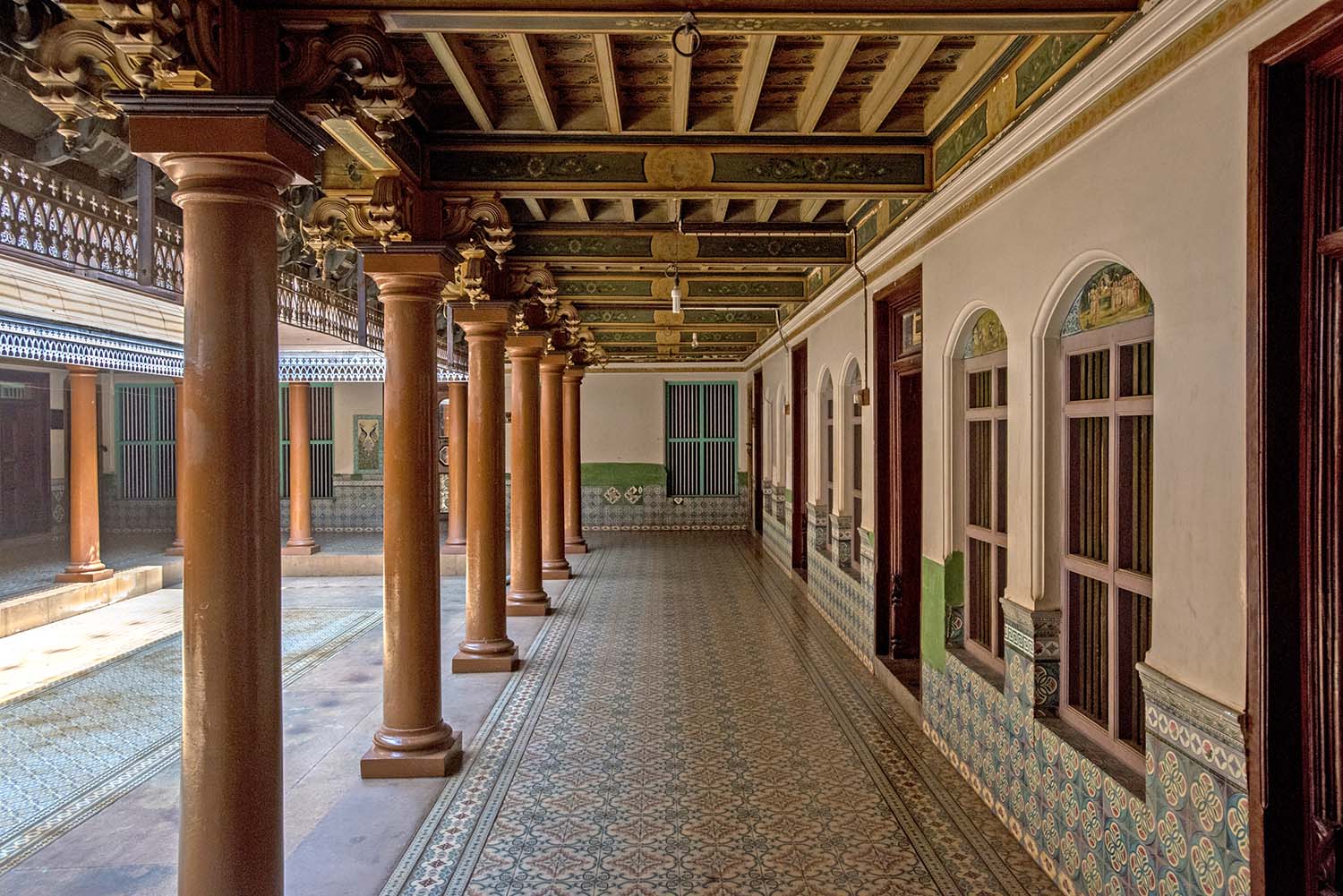 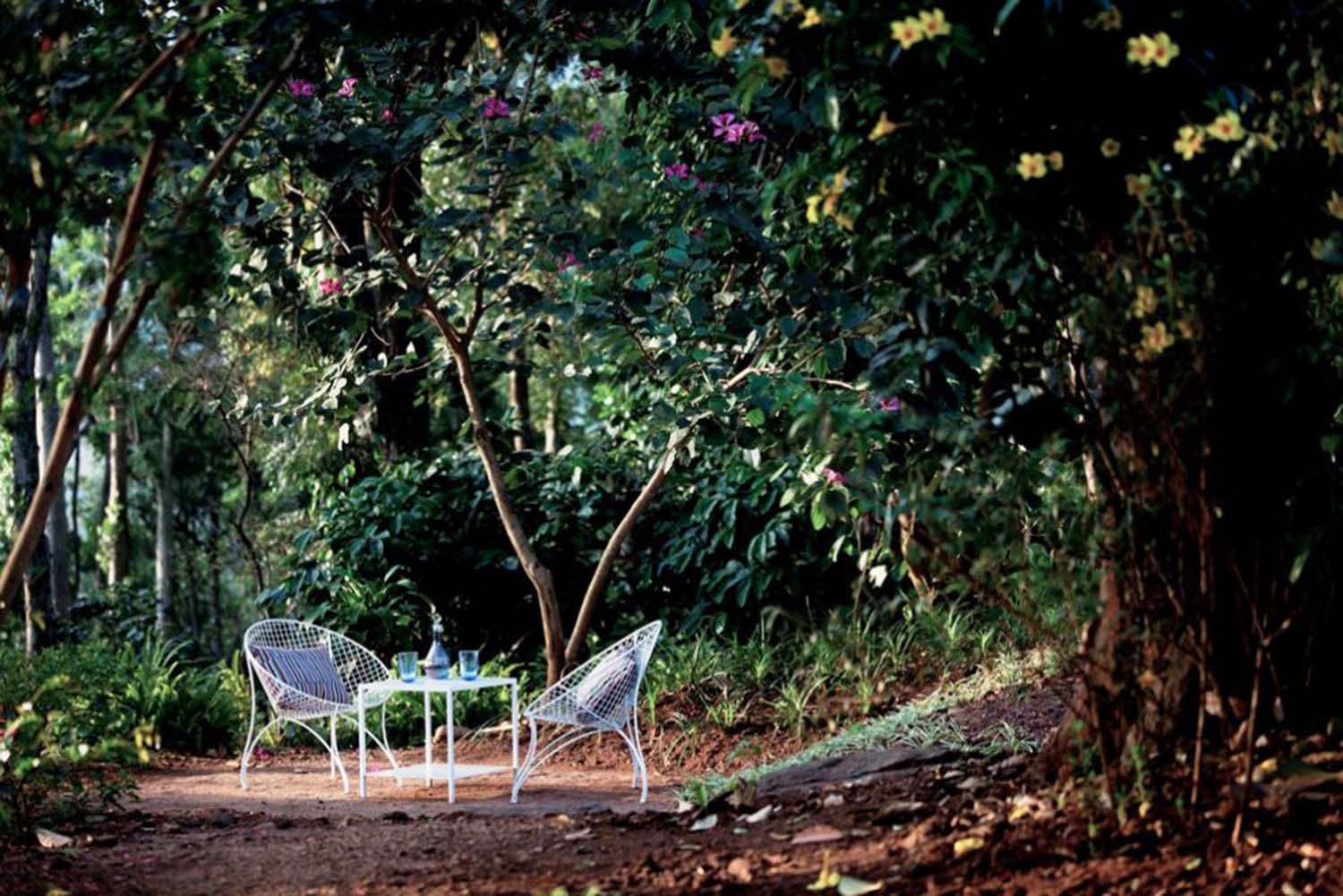 Rajakkad
Read More
Take in the nature at Rajakkad Estate.
Previous
Next

As one of Chennai’s best known landmarks, Taj Coromandel presents a rich fusion of South Indian design and classic elegance.

A 130 year old family mansion dating back to French colonial times in Pondicherry. Built by a member of a prosperous Tamil community, its architecture expresses a character that integrates the vernacular with the colonial in a novel and striking manner.

Designed by and for exacting individuals with spirit, Svatma is the epitome of Tamil culture and art bottled into a space-time capsule of mystique and allure.

Visalam was the splendid house that KVAL Ramanathan Chettiar built for his eldest daughter, Visalakshi, to create a lively home for gatherings and family life. Half a century later, it is restored as a masterpiece that remains faithful to its original conception.

Originally constructed in the 18th century, this building is a fine example of the southern vernacular; its jigsaw of wooden parts was influenced by the house building traditions of Kerala. Rajakkad's Pallam Palace began life in a very different environment and settles now with quiet authority upon its hill.