The Kingdom of Happiness. Blending pristine nature with social harmony, this deeply spiritual land has earned the title of “The Last Shangri-la”.

Bhutan, The Land of the Thunder Dragon, is an extraordinary little kingdom in the Himalayas that lies in between India and Tibet. With stunning landscapes, Bhutan is a dream for all lovers of nature and the outdoors. But it is the country's strong sense of tradition and culture, passionately preserved to the present, that holds the enduring image that most travellers will endear to. Vajrayana Buddhism influences every aspect of Bhutanese life, its teachings form the very essence of a distinct identity that belongs to its population of 750,000, who incidentally are the surviving believers of this ancient school of Mahayana Buddhism. Another unique characteristic that defines Bhutan is its own emphasis on the country's Gross National Happiness index, which highlights the importance of economic growth and development, cultural preservation, environmental sustainability and good governance, to name a few. By virtue of these guiding principles, Bhutan has taken a strict stance concerning environmental preservation to protect the country's flora and fauna—that is just as rich as its Buddhist traditions. Bhutan might be a poor nation compared to many in the world but its fertile lands, small population and its unorthodox emphasis on happiness makes it a richly balanced country. It is this blend of pristine nature with social harmony in a deeply spiritual land that has earned the gentle kingdom of Bhutan the title "The Last Shangri-la". 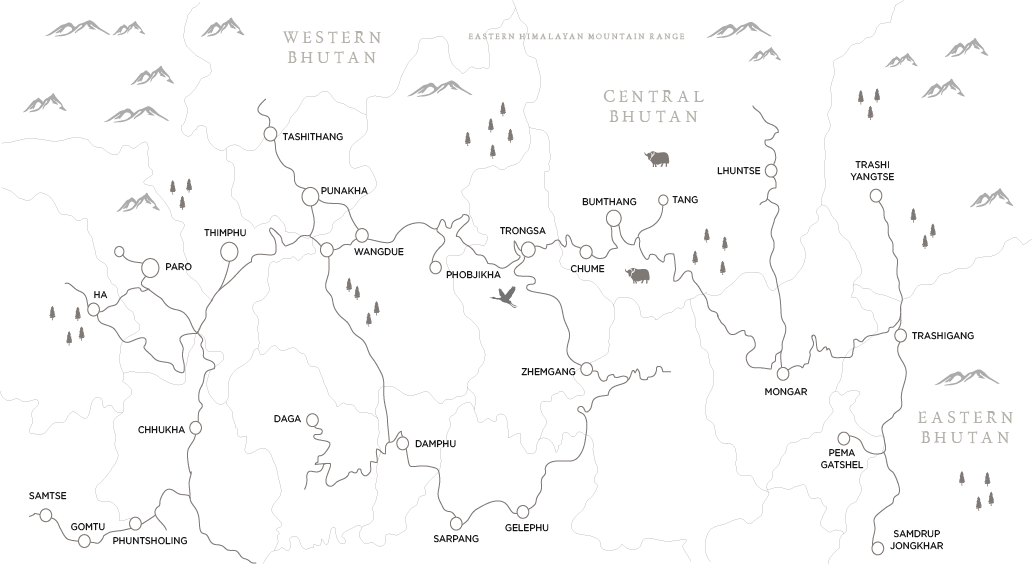 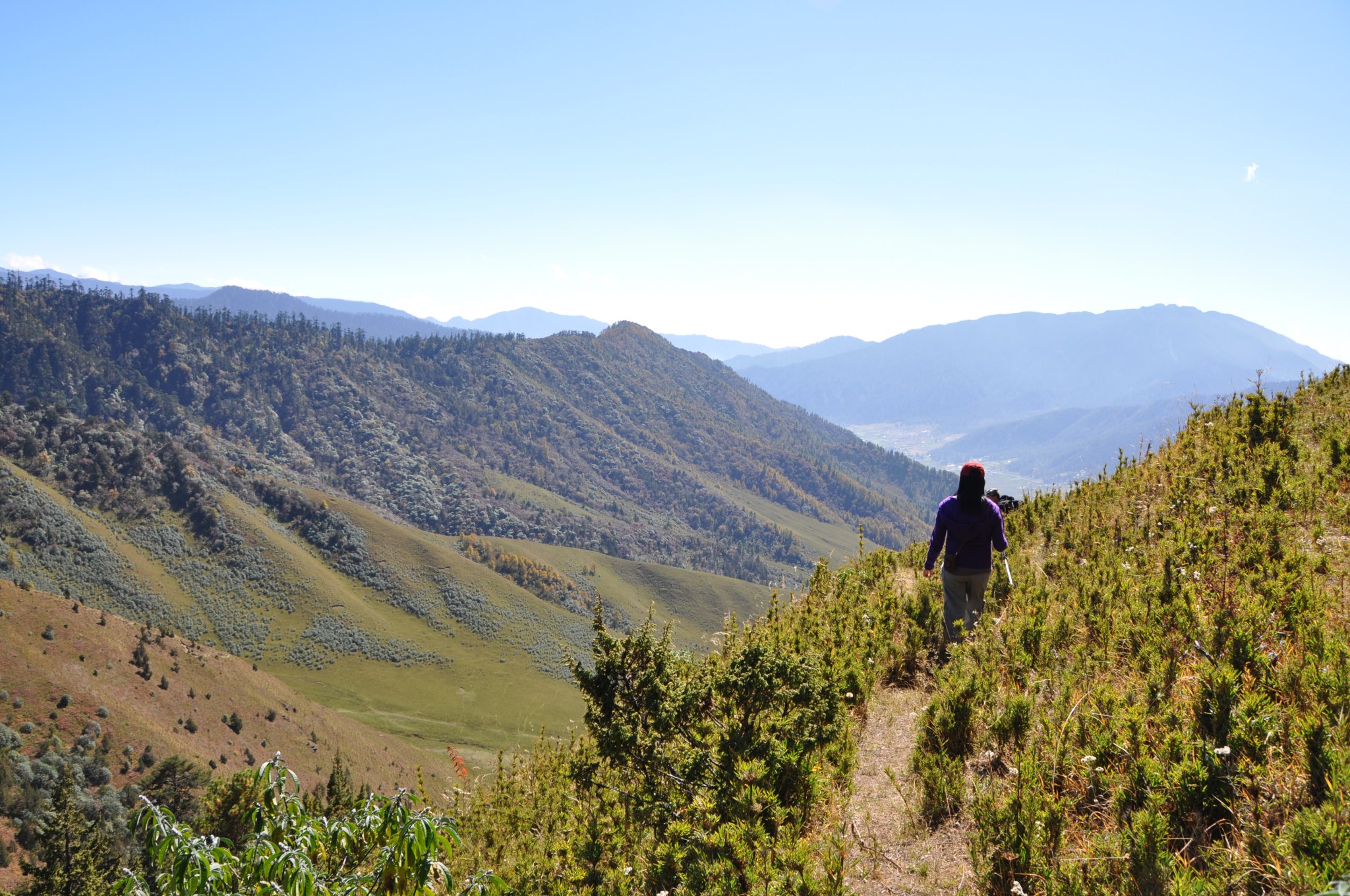 The Longtey Hike
Read More
If you are looking for a picturesque hike through some of the most beautiful parts of Gangtey, this would be it! The Longtey Hike is our favourite hike in Bhutan. It takes you up from 3000 m to about 4000 m when you cross the pass into Phobjibka Valley. But it has to be the most beautiful , especially in Autumn when its dry or Spring when all the Rhododendrons are out and in full bloom. One part of the hike you go through a canopy of rhododendron trees and when in bloom its an amazing sight to behold. 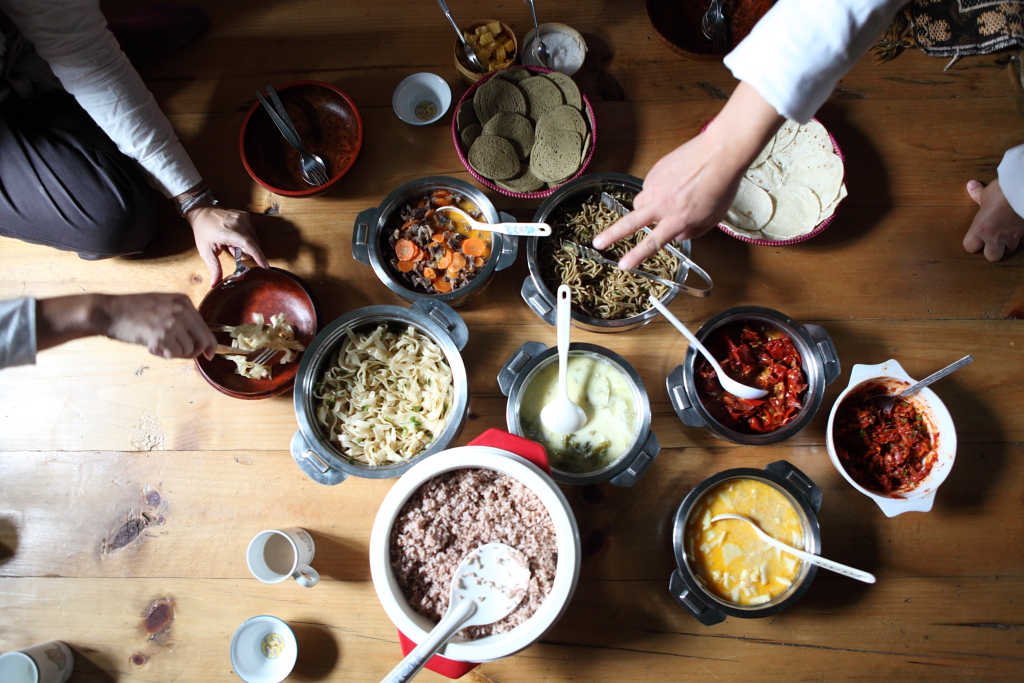 Aum Tshomo's Farmhouse Feast
Read More
Served in the authentic setting of an old farmhouse, the meal was better than expected. The combination of delicious local produce and Aum Tshomo’s cooking skills made this the most memorable meal of our journey—which came as no surprise since generations of her family have been cooking for the royal family until today! Among many dishes on the menu were Ema datse (chili cheese), buckwheat noodles that can only be found in this area and generous servings of local red rice. To end the meal, a tasty but potent cup of homebrewed ara infused with cordyceps—certainly not for the faint of heart! 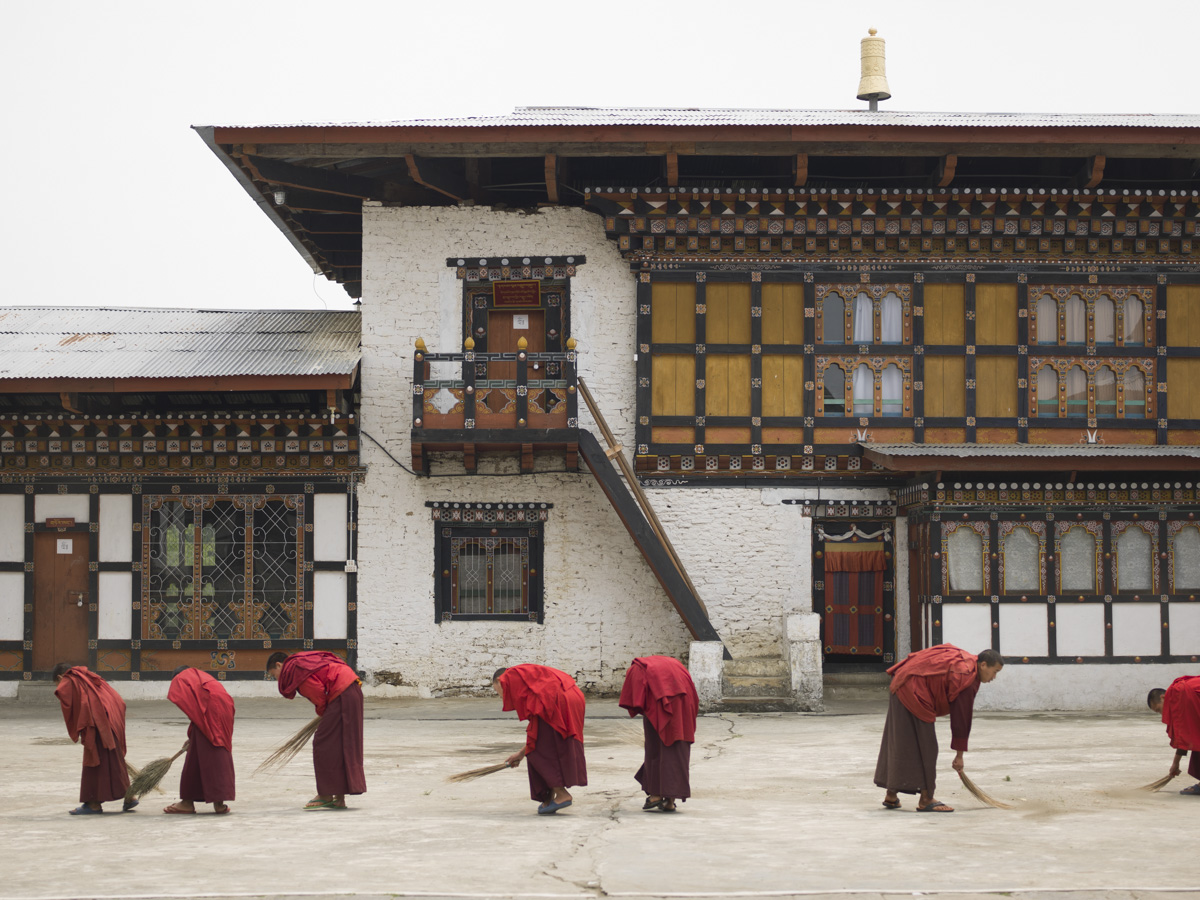 Mediation with the Monks
Read More
The Gangtey Shedra and Monastery are working institutions and we have worked together with the Shedra for our guests to experience a Buddhist meditation class. Shedra is an institute where the monks learn the Buddhist philosophy, poetry, logic, meditation and debate. In addition to the regular academic practice and classes for monks, the Shedra provides a meditation class for our guests, mainly on Compassion and Shamata (tranquility and calm abiding meditation) by highly qualified teachers. This meditation practice will help you overcome all the stresses, develop a peaceful mind and to generate kindness. Prior to the meditation class there will be time for a discussion with the instructor on meditation or any other aspect of Buddhism. 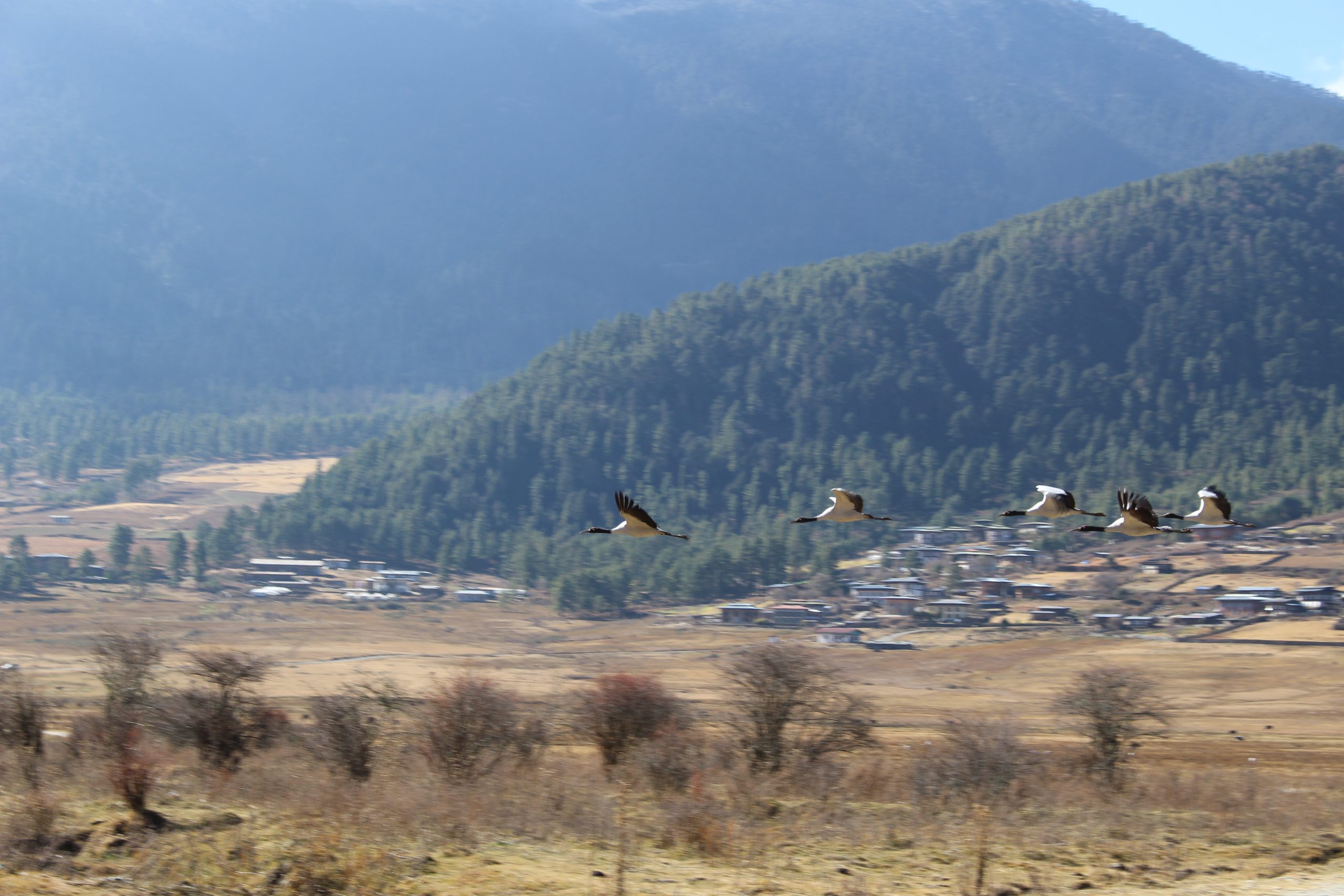 Black Necked Cranes
Read More
Phobjikha is a wide glacial valley with a central stream meandering through the open grassland and thickets of dwarf bamboo. The valley is the winter home for the endengared Black Necked Cranes, who migrate from Tibet every November. The Central Valley inhabited by the cranes in winter has mostly dwarf bamboo. The repeated grazing of the bamboos by the local cattle and horses in summer prepares the ground for the wintering Cranes. The magnificent Black-necked Cranes heighten the breathtaking scenery of Phobjikha in winter respiratory. The Gangtey Nature Walk is our favoured way to observe these majectic birds from a distance. It is said that as they enter the valley of Phobjikha, they circle the Goemba three times, before descending into the valley for winter. 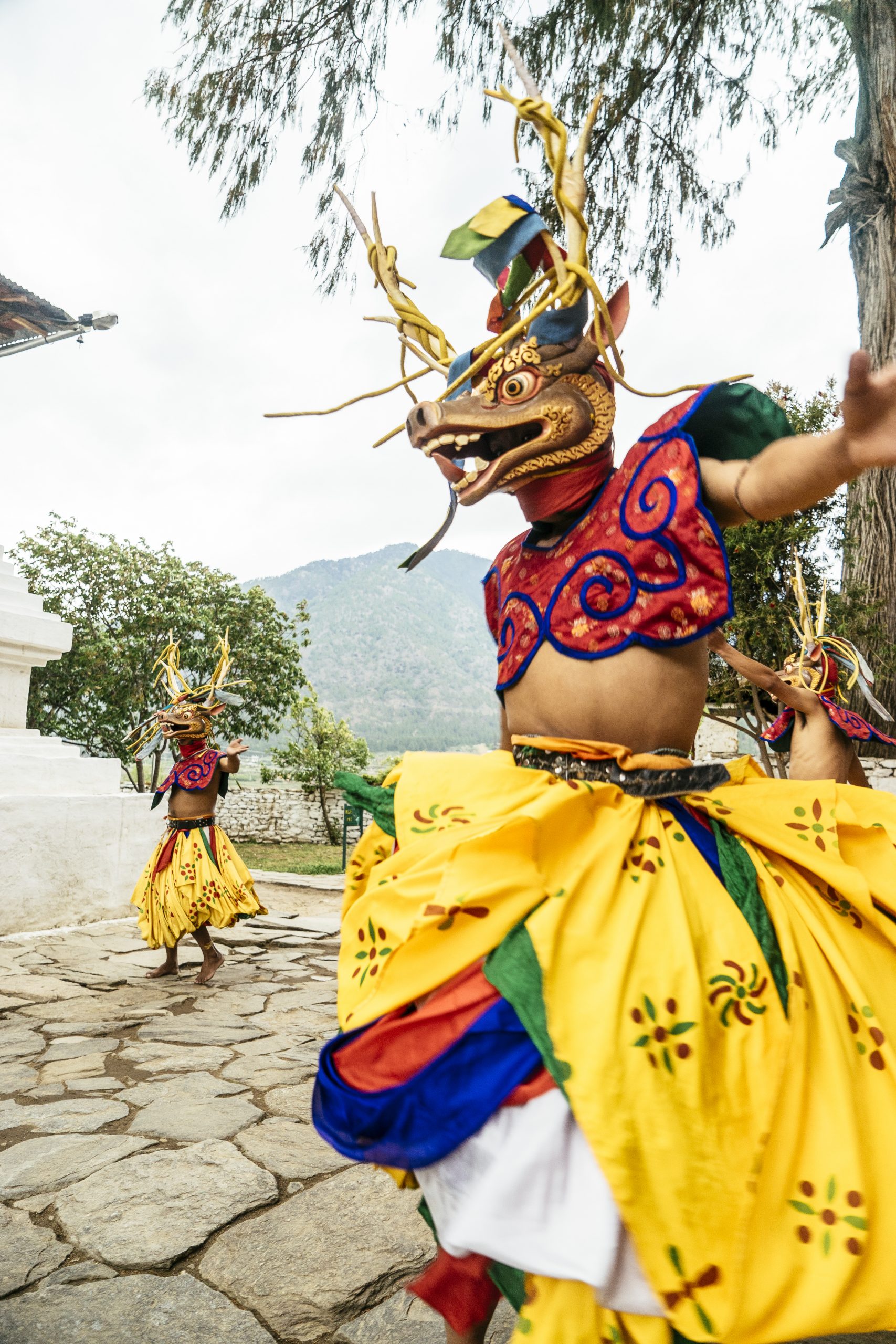 Festivals in Bhutan
Read More
Tshechus are grand events where entire communities come together to witness religious mask dances, receive blessings and socialize. In addition to the mask dances, tshechus also include colorful Bhutanese dances and other forms of entertainment. It is believed that everyone must attend a Tshechu and witness the mask dances at least once to in order to receive blessings and wash away their sins. Every mask dance performed during a Tshechu has a special meaning or a story behind it and many are based on stories and incidents from as long ago as the 8th century, during the life of Guru Padmasambhava. In monasteries, the mask dances are performed by monks and in remote villages, they are performed jointly by monks and village men.
Previous
Next 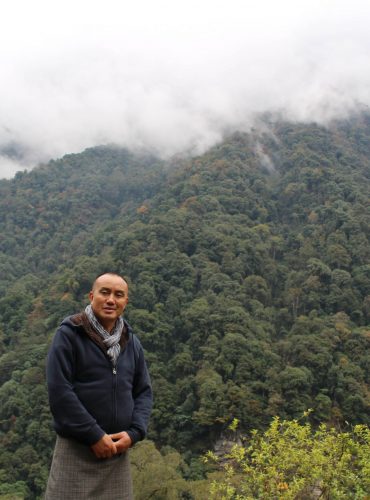 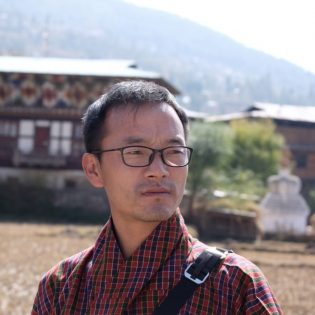 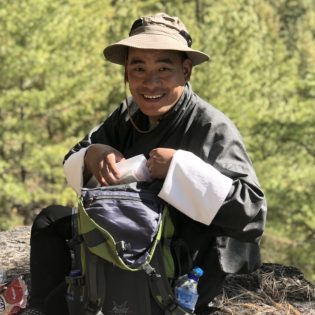 Lead by our co-founder Phub Dorji, our Bhutan team is a strongly knit network of story-tellers, explorers and care-takers. As our guides are your first point of contact, we believe in creating a kinship based on purity and warmth.

From greeting you at the Paro Airport to cooking fried rice at a rest point overlooking Mount Jomolhari, they are there to support you every step of the way. Aside from being fully licensed, our guides have years of experience under their belts.

They have been to the far reaches of the country finding hidden hiking trails and special characters to make your experience one of a kind. Their combined knowledge of Bhutan will take you to the most strikingly beautiful spots in the kingdom—from walks through nature to the peaceful stillness of a temple—experiences that unearth the inward journey we encourage.

Our guides have all undergone training courses and are licensed under the Tourism Council of Bhutan. But more than that, they will soon become your friends, accompanying you along a journey that will inspire and enrich. No request is too large for this team, who are happy to go above and beyond to bring their Bhutan to life.

Spring (March to May)

Spring is clearly the season for rebirth and reawakening as apple, pear, cherry and peach trees blossom from March to April while forests of rhododendrons flower right through to May. Only the lucky ones get to witness the jacarandas bloom at Punakha Dzong because they appear only for a month. It stays rather cold in March with temperatures ranging from 0-16°C and gets warmer in April and May with temperatures as low as 4°C and as high as 26°C.

The summer months of Bhutan see more rain than usual, though it is a common misconception that summer in Bhutan is also its “monsoon season”—it only drizzles lightly with showers not lasting longer than an hour; the rain does get slightly heavier when autumn looms. While it is easier to access the sought-after sights and spots, the summer climate allows for seasonal produce like the rare Matsutake and Chanterelle mushrooms to flourish. With bushier trees and thicker grass lushly regrown over the hills and mountains of red clay soil, green is very much the colour of the season. Temperatures range from a low of 13°C to a high of 30°C.

With paddy fields all golden, autumn is the time to harvest. Markets are filled with the freshest produce and the festivals are a spectacle to behold. Temperatures stay relatively warm till October, when it gets as cold as 5°C and as warm as 25°C.

The eastern Himalayas become outstandingly visible during the winter months of clear blue skies. While the air is crisp, dry and cold, the winter conditions invite black-necked cranes to make their seasonal pilgrimage to Phobjikha Valley. Temperatures range from below freezing to 18°C.

All trips to Bhutan have to be booked via an authorized agent. With most other agencies, that usually entails selecting an existing package that does not allow for much flexibility.

At Amala Destinations, we believe in creating your ideal trip with you. After meeting with one of our knowledgeable destination planners, we take your requirements into consideration before coming up with a specially designed itinerary and handling all the necessary travel logistics. All you need to do is pack your bags and set off on your journey.

All visitors to Bhutan apart from Indian, Bangladeshi and Maldivian citizens will require a visa (USD$40 processing fee). Amala Destinations will handle this on your behalf – all we need is a scan of your passport. A visa clearance letter will have to be presented at the point of entry.

The Bhutanese love their food spicy. Chillies feature prominently and the locals are usually not satisfied unless a meal packs a lot of heat. Rice is their main staple, with chicken, beef and pork the typical choice of protein, accompanied by one or two side dishes of vegetables. The country’s favourite dish is Ema Datshi, a simple dish consisting of chilli and cheese.

The kingdom’s state religion, Mahayana Buddhism is central to the Bhutanese lifestyle. At the heart of Mahayana Buddhism is a deep compassion for all sentient beings, and as a mark of respect it is advised that visitors engage in the same mindfulness, even if it means refraining from swatting flies or crushing ants.

A distinguishing element of Bhutan’s cultural heritage, the kingdom’s traditional dress has evolved over thousands of years. The Gho is worn by men only, and is a knee-length robe, which looks similar to a kimono, that is tied at the waist by a traditional belt called a Kera. The women wear the Kira, a long, ankle-length dress, with a light outer jacket known as a Tego, and an inner layer known as a Wonju.