The Masai Mara together with Tanzania’s Serengeti form Africa’s most famous wildlife park, the Masai Mara National Reserve. The image of acacia trees dotting endless grass plains epitomises Africa for many, then add a Maasai warrior and some cattle to the picture and the conversation need go no further.

The undeniable highlight of the Masai Mara National Reserve is undoubtedly the annual wildebeest migration traversing the vast plains of the Serengeti and the Masai Mara. It is known as the largest mass movement of land mammals on the planet – with more than a million animals following the rains. Large prides of lions, elephants, giraffes, gazelles and eland can also be spotted in the reserve. Aside from horse riding safaris and traditional vehicle safaris, hot-air ballooning over the Mara plains has become almost essential. 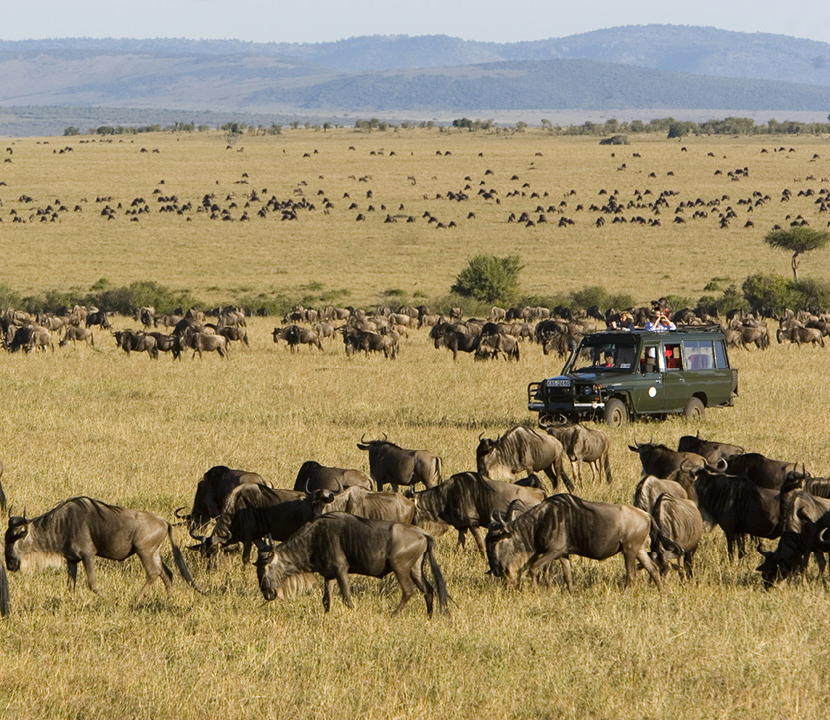 Wildebeest Migration
Read More
Between the months of July and October one and a half million wildebeest, accompanied by vast numbers of zebra and gazelles make the long and dangerous trek from drier lands in Tanzania, northwards to this corner of Kenya. 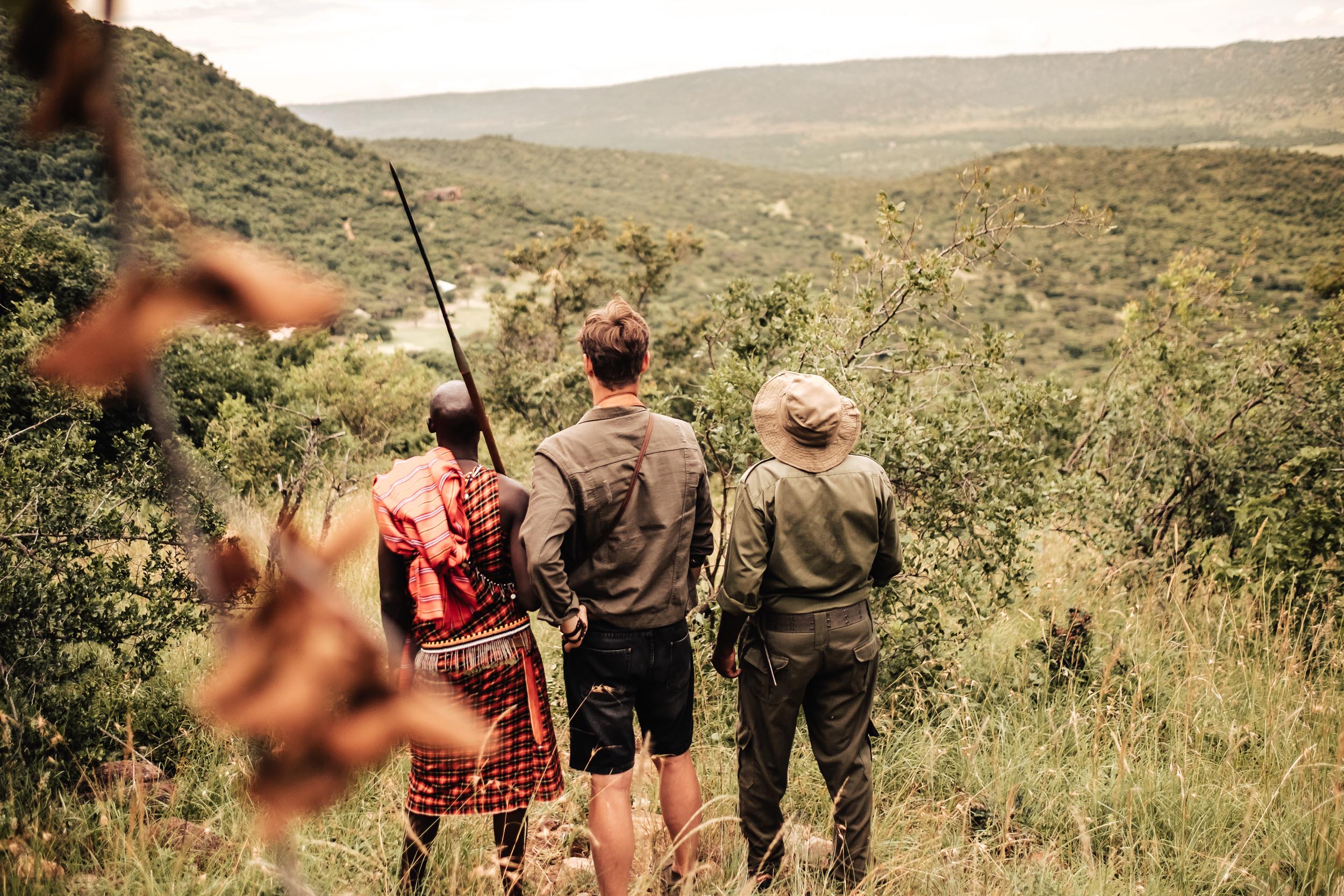 Walking Safari
Read More
Head out into the bush with your guide on foot. 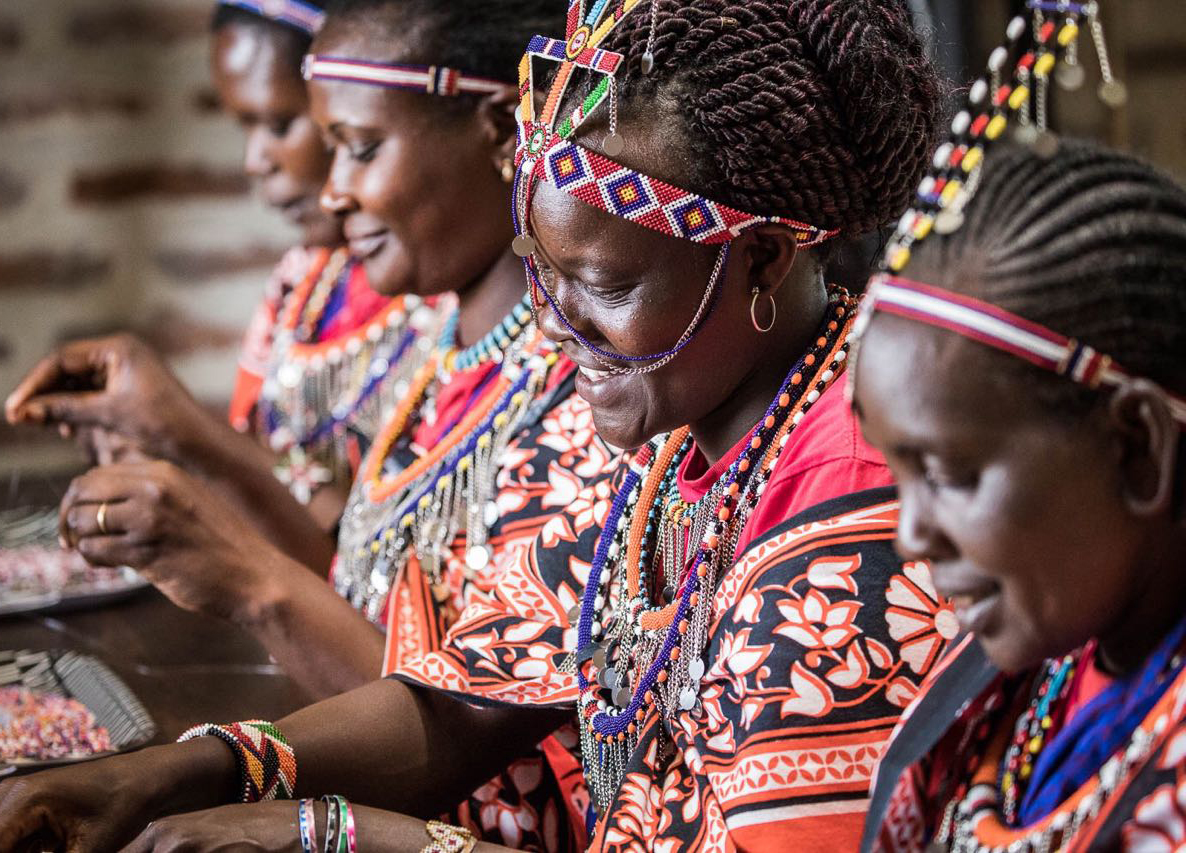 Meet the Maasai
Read More
Meet the local Maasai and understand their culture.
Previous
Next

Mara Plains Camp hides in the thick forest on a bend in the Ntiakitiak River. It is inside the 35,000-acre Olare Motorogi Conservancy and bordering Kenya’s Maasai Mara Reserve, and the camp itself Mara Plains is a stunning and intimate experience of its own in one of the most iconic wildlife destinations on the planet. As you arrive at the camp, you cross a bridge and climb a few giant steps, you are greeted by an endless horizon with a single, flat-topped acacia, the quintessential shape of East Africa. “When I laid out the camp and design, it was using the arrival, the bridge, the main area and one single distant tree as a central line. I tasked the tentmakers with the job of building a 25-metre tent, the biggest they had ever tried, with an arrival opening that was an exact proportion of the 35mm photographic frame.

Mara Nyika, meaning “Large Plains or Great Plains,” is an intimate four tent camp set in a valley, straddling a small stream on the western side of the Naboisho Conservancy bordering the Maasai Mara. Mara Nyika’s four light-coloured canvas tents were designed to sit under the canopy of umbrella thorn trees while still offering guests views out over the plains. Walkways from the tents to the main area evoke the feeling of a treehouse under canvas and the camp’s ethic and inspiration is one of exploration and adventure. Privacy is the key to Mara Nyika. Privacy to live, think, explore, be romantic and be pampered – all the while with one of the most spectacular backdrops Africa can provide.

Angama Mara sits at the very heart of all safaris within East Africa: to the north Samburu, Mount Kenya and Laikipia; to the east Tsavo, Amboseli and Kenya’s acclaimed coastline; to the south Tanzania’s northern circuit which includes the Serengeti, Ngorongoro Crater, Manyara and Zanzibar; and to the west mountain gorillas and chimpanzees. Angama Safaris will seamlessly plan and execute your travels through the best the region has to offer.

Deep within the Kenya Masai Mara National Reserve, Rekero offers a spectacular location from which to watch the Great Migration as the wildebeest thunder across the river just outside camp. This traditional East African Kenya camp evokes the romance of safaris from a bygone era. The elegant tents form a tranquil oasis perched strategically above the mighty Talek River of our Mara tented camp. The sweeping views from camp take in the surrounding plains of the Maasai Mara, which support some of the greatest concentrations and diversity of wildlife in Africa.

The award-winning Cottar’s 1920s Safari Camp and private Bush Villa are located in the famous ‘seventh’ natural wonder of the world, the Maasai Mara in Kenya. Offering a bespoke safari experience, it’s owned and managed by the oldest established and continuing safari family in Africa. The Cottar family provide genuinely stunning wildlife and wilderness experiences, engaging in the original spirit and essence of ‘safari’: an abundance of wildlife, a guarantee of privacy, and the highest standards of professional guiding, in a luxurious and authentic safari environment.

Set in the 210km² private Mara Naboisho Conservancy, Naboisho Camp offers spectacular game viewing, from the herds of antelope that dot the plains of this wilderness corridor throughout the year to the high concentrations of predators, including lion and cheetah. But the real magic of Naboisho Camp is its sheer exclusivity – you’ll experience a level of safari solitude and serenity simply unheard of in the busy Serengeti and Masai Mara reserves. With just nine spacious tented suites, Naboisho is an intimate and elegant safari camp that balances your wilderness experience with discreet creature comforts. Even better, Naboisho Camp offers the options of fly camping, walking safaris, and night drives – activities not commonly available in most national parks.

Alex Walker’s Serian is a charismatic collection of exclusive and intimate safari camps in the prime wildernesses of Kenya and Tanzania. We operate and outfit safaris, and our focus is on offering you access to the magic of the bush in a rich variety of ways. All of our clients have exclusive use of their safari vehicle at no extra cost, and on top of that, walking adventures, flycamping, night game drives, photography, ballooning… The list goes on. Our objective is to show you there’s more to safari than driving around ticking big animals off a list… It’s about being open to falling under the spell of this enchanting landscape. The word ‘serian’ comes from the Masai language, meaning ‘serene… calm… tranquil’ and there is an element of this that is particular to the bush.

This is the camp for those who want that extra bit of luxury. We’ve kept Governors’ Il Moran small and intimate, with added touches that place this camp at the top of the safari accommodation range. Il Moran is widely regarded as the premiere camp in the Masai Mara, with the best game viewing right on your doorstep. You’ll be the personal guest of our manager who will look after all your needs. Hidden under ancient trees deep in the forest, are just ten tents which line the winding banks of the Mara River. Dark chunky wooden tables contrast with oversized blue couches and a central, colourfully beaded chandelier, while tribal portraits and African artefacts are dotted around.

Set amongst the forest at the foot of the scenic Oloololo escarpment (the rim of the Great Rift Valley) in Kenya’s iconic Masai Mara National Reserve, is the classic and elegant Bateleur Camp. Here, amidst the reserve’s astounding year-round concentration of animals, including the seasonal Great Wildebeest Migration, guests can have an unsurpassed wildlife experience. Guests can almost exclusively explore this area on a game drive or on foot, enjoying access to pristine outdoor dining locations.